**Save 20% on tickets from September 22 through October 13 when you enter the code INSIDER during our Fan Appreciation Sale!

Multi-Platinum-selling artist TobyMac and the Awakening Foundation announce the 2023 TobyMac Hits Deep Tour artist line-up featuring TobyMac and the DiverseCity band with support from CROWDER, Cochren & Co., Tasha Layton, Jon Reddick, and Terrian. The annual arena tour features 30 dates and will be a night of music and fun for the entire family beginning on January 26th through March 31st. Tickets will go on sale next Thursday, September 22nd at Noon ET. Click here to purchase tickets.

"The Hits Deep Tour announcement is one of my favorite times of each year," shares Curtis Pinkerton, Director of Marketing, Awakening Events. "This tour has become an annual tradition for us at Awakening Events and for thousands of families across the US. We’re honored to once again partner on a national level with our great friends at K-LOVE Radio, Air1 Radio, Food for the Hungry, and Altrua HealthShare, to present TobyMac’s Hits Deep Tour 2023."

TobyMac's Hits Deep Tour is an Awakening Foundation event and is supported nationally by K-LOVE Radio, Air1 Radio, Altrua HealthShare, and Food for the Hungry. Fans will hear TobyMac's hits as well as new songs from his recent release LIFE AFTER DEATH, which debuted as Billboard's No. 1 Christian and Gospel record of the week during street week.

Kicking off ticket sales, there will be a special Fan Appreciation Launch Discount for 20 percent off standard tickets using the code INSIDER from September 22nd until October 13th. See below for the complete list of tour dates and markets.

This is a Ticketmaster SafeTix Event. Screenshots and print outs will not be accepted for this event.

As you arrive at the CAJUNDOME, you will need to display your tickets on your mobile phone. We recommend using the Ticketmaster App for the easiest and fastest option.

3 Simple Steps to Use Your SafeTix on Event Day

What does my SafeTix mean?

It's simple. We believe every fan deserves access to authentic tickets they can trust at every step. To protect you from fake tickets and make it easier than ever to enter a venue, we're introducing SafeTix, Ticketmaster's encrypted digital tickets that add anti-counterfeiting features to your tickets.

ABOUT TOBYMAC: With more than 16 million units in career sales and a whopping seven GRAMMY® Awards, TobyMac's career continues on the fast track. His RIAA Certified Gold studio album, THIS IS NOT A TEST, garnered a GRAMMY® Award and Billboard Music Award nomination on top of debuting at No. 4 on the Billboard Top 200. Each of his six studio solo projects have achieved Gold certification, a first for any artist in the history of his label, Capitol Christian Music Group. Among those is his project EYE ON IT, which debuted atop the Billboard 200, only the third Christian album ever to do so. THE ELEMENTS, his latest GRAMMY® -nominated, a full collection of music, boasted "Everything," "Scars," "Edge of My Seat," "See The Light" and more alongside the chart-topper, RIAA Gold Certified "I just need U." His most recent singles, “21 Years,” “Help Is On the Way (Maybe Midnight),”  “Promised Land,” "The Goodness (feat. Blessing Offor),"  "Everything About You (feat. Marlee)" and "Show Up Choose Love (feat. Jon Reddick),” are available wherever you stream music, along with his seventh studio project, LIFE AFTER DEATH.

ABOUT CROWDER: With more than three million records sold and three GRAMMY® Nominations, Crowder’s first solo album, Neon Steeple, debuted at No. 8 on the Billboard 200, was named iTunes 2014 Christian Album of the Year, garnered multiple radio hits, a GRAMMY® nomination for “Come As You Are,” a Grand Ole Opry debut, a Dove Award, and multiple nods and numerous K-LOVE Fan Award Nominations. American Prodigal, his GRAMMY® nominated follow-up album, released in 2016, landing at No. 1 on the Christian & Gospel Album Chart, No. 3 on the Digital Albums Chart, No. 5 on Billboard’sTop Album Sales Chart, and No. 12 on the all-genre, Top 200 Billboard Chart. The song “All My Hope” brought Crowder a No. 1 radio single, in addition to two Top 10 singles prior to that from American Prodigal. His third project, I Know A Ghost, hit No.1 yet again on the Billboard Top Christian Albums Chart, while also earning his third GRAMMY® nomination for Best Contemporary Christian Album. Following in the footsteps of his previous releases, Crowder’s latest studio album, Milk & Honey, debuted at No.1 on the Billboard Top Christian/Gospel Albums Chart, bringing about a record-breaking year of music for the Texarkana-native upon its arrival. Nominated for Pop/Contemporary Recorded Song of the Year at the 2021 Dove Awards, the project’s lead single-turned-smash hit, “Good God Almighty,” not only peaked at No.1 at Christian radio but also sat at the top of the Billboard Christian Songs Chart for five consecutive weeks and landed Crowder his first No. 1 on Billboard’s Hot Christian Songs chart. Continuing the success, the album’s sophomore single, “In The House,” became Crowder’s fourth No.1 at radio in February–marking his first time having multiple, consecutive singles from the same album reach the top of the chart, overall. With recent press highlights including GMA, Fox & Friends, Wall Street Journal, PEOPLE Magazine, SPIN, American Songwriter, and many more, Crowder released the the18-track expansion ‘Milk & Honey (Deluxe)’ on March 4.

ABOUT AWAKENING FOUNDATION: The Awakening Foundation exists to share the message of hope and resources with individuals and families in local and international communities by bringing together artists, fans, and like-minded organizations through live events and missional endeavors to serve and empower those in need. All Awakening Foundation events are powered by Awakening Events. Consistently ranked among the top promoters in America, and reaching as high as No. 3 in the world in total tickets sold Awakening Events is a leader in the live faith-based entertainment industry. Be sure to find out more at AwakeningFoundation.com.

ABOUT K-LOVE: K-LOVE creates compelling media designed to inspire and encourage audiences to have a meaningful relationship with Christ. K-LOVE is listener-supported and delivers positive and encouraging music and messages through nearly 600 signals across all 50 states, the K-LOVE App, smart devices, klove.com, and K-LOVE On Demand. For more information on K-LOVE, please visit

ABOUT AIR1: Like its parent company (Educational Media Foundation) and sister station (K-LOVE), Air1 exists to create compelling media that inspires and encourages audiences to have a meaningful relationship with Christ. Broadcast on more than 300 signals nationwide, and streaming around the world on Air1.com, the Air1 Radio App, iHeartRadio, Alexa, Siri, TuneIn, Roku, and more, Air1 is always there to welcome you and help you “worship through it.”

ABOUT ALTRUA HEALTHSHARE: Altrua HealthShare is part of Altrua Ministries, a 501(c)(3) nonprofit organization. As a nationally recognized, faith-based Health Care Sharing Ministry of individuals and families, a collaborative community of health-conscious people, providers, dentists, nurses, staff and members, we are dedicated to a single purpose: improving your health by “Caring for One Another.” Our membership opportunities are developed and based on Biblical principles established for living a healthy and honorable lifestyle, and members must believe in our Statement of Standards to join. Find out more at https://altruahealthshare.org/.

ABOUT FOOD FOR THE HUNGRY: Food for the Hungry (FH) is a Christian humanitarian organization ending all forms of human poverty by providing life-changing development programs, disaster relief, and advocacy. For over 50 years, FH has been working to respond to human suffering and graduate communities from extreme poverty into self-sustainability within a decade. By creating context-specific solutions in education, agriculture, health, livelihood, clean water, and disaster risk reduction, the nonprofit focuses on transformational development, investing in children as the key to lifting entire communities out of poverty. With 99% of staff working in their country of origin, FH works side by side with local leaders, churches, and families to implement innovative solutions. The organization currently serves in over 20 countries worldwide. For more information, follow FH on Instagram and Twitter, or visit www.fh.org 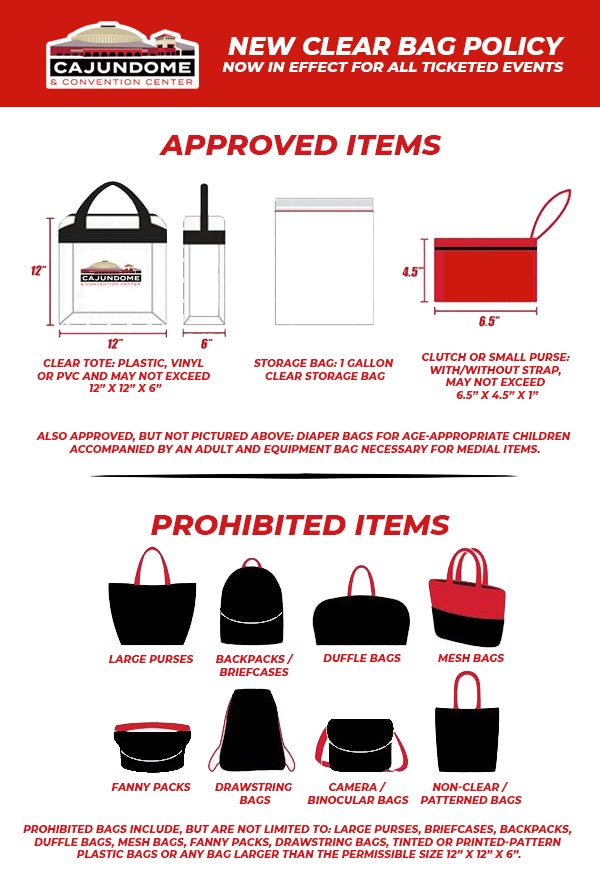 Update: A limited number of Private Suites are currently available for this show, please contact us at 337-265-2355 for more information.

Experience a CAJUNDOME event from the comfort of a luxury suite. These newly renovated luxury suites can accommodate anywhere from 16 - 100 guests and include some of the finest amenities available. While the view from the suites will be one to remember, the real memories come from those extra perks that make these suites the premier showplace for entertaining. Rest assured that whomever your guest may be, the level of entertainment and service will be second to none.

Looking for a suite experience for a smaller group of 2-6 guests? Consider the Audi Lafayette VIP Club to entertain your guests in a comfortable, shared suite experience! 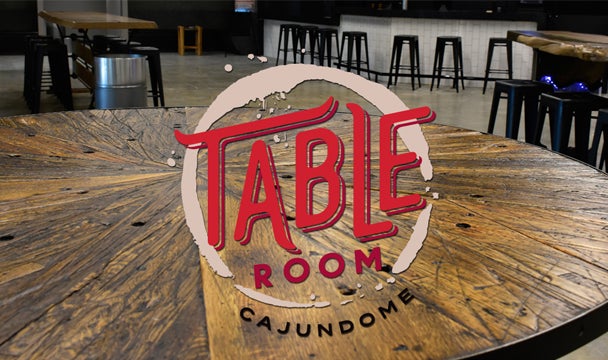 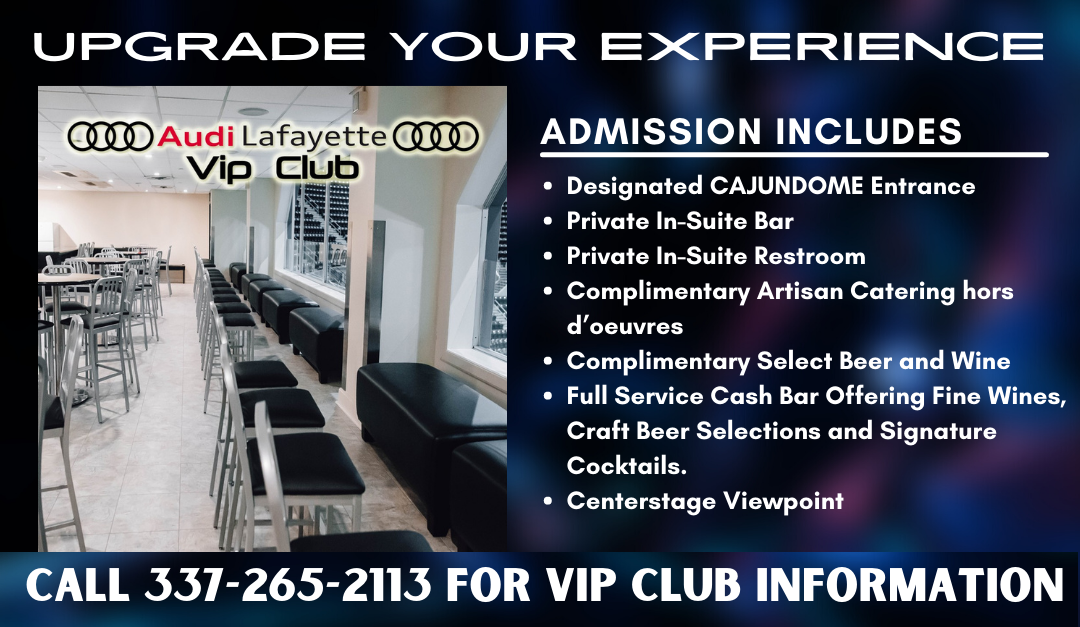 Audi Lafayette VIP Club provides you with a spectacular view of the show, plus select hors d’oeuvres, beer and wine before and during the show. This exclusive experience is limited so make sure to reserve a spot for you and your friends today!

* No refunds or exchanges.

This is a Ticketmaster SafeTix Event. Screenshots and print outs will not be accepted for this event.

As you arrive at the CAJUNDOME, you will need to display your tickets on your mobile phone. We recommend using the Ticketmaster App for the easiest and fastest option.

3 Simple Steps to Use Your SafeTix on Event Day

What does my SafeTix mean?

It's simple. We believe every fan deserves access to authentic tickets they can trust at every step. To protect you from fake tickets and make it easier than ever to enter a venue, we're introducing SafeTix, Ticketmaster's encrypted digital tickets that add anti-counterfeiting features to your tickets.

You assume all risks, hazards, and dangers arising from or relating in any way to the risk of contracting a communicable disease or illness—including, without limitation, exposure to COVID-19 or any other bacteria, virus, or other pathogen capable of causing a communicable disease or illness, whether that exposure occurs before, during, or after the event, and regardless of how caused or contracted—and you hereby waive any and all claims and potential claims against Ticketmaster, Live Nation, and the Event Organizer MF Entertainment— and against any companies affiliated with Ticketmaster, Live Nation, or the Event Organizer /Promoter MF Entertainment— relating to such risks, hazards, and dangers.