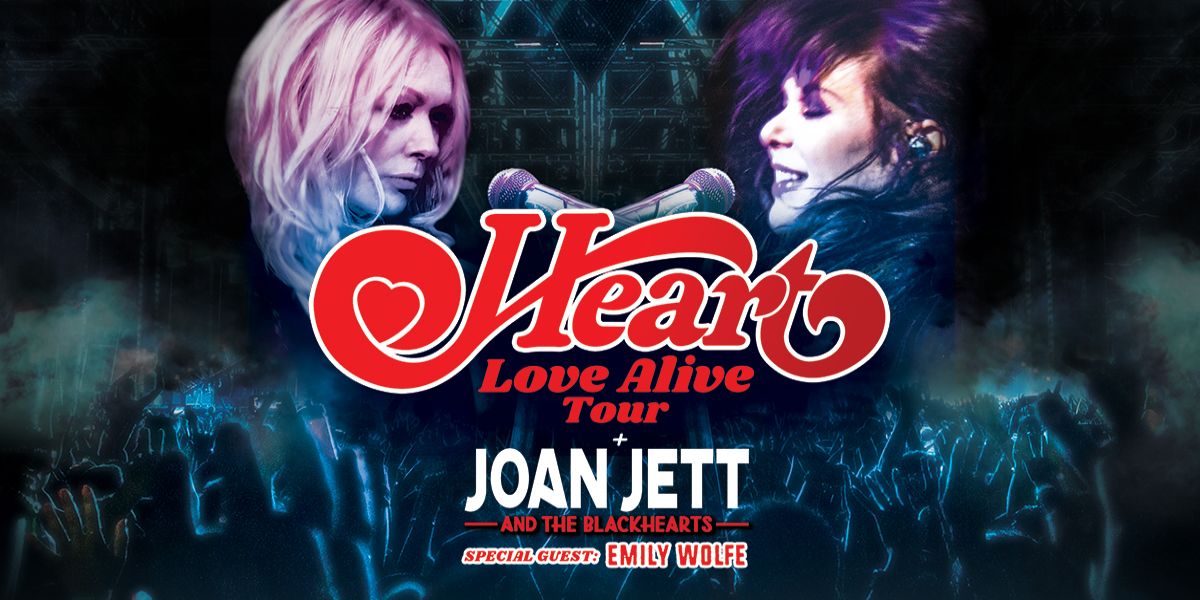 with special guests:
Joan Jett and The Blackhearts
Emily Wolfe

HEART--ANN and NANCY WILSON--will extend their massive “Love Alive” cross-country summer tour into the fall with dates now taking the group to the CAJUNDOME on October 5th, 2019. Paul and more with Joan Jett & The Blackhearts joining as very special guests and Lucie Silvas opening. Tickets go on sale Friday, June 21 at 10:00 AM.

Read an interview with ANN and NANCY here.

Produced by Live Nation, the now 48-city trek by the trend-setting, multiple-platinum Rock & Roll Hall of Fame legends will include a stellar line-up with Joan Jett & The Blackhearts joining the majority of shows. The first leg of the tour will also include Sheryl Crow, Brandi Carlile, Elle King and Lucie Silvas as special guests. See full itinerary and details below for a breakdown of which shows these artists will be appearing on with HEART.

HEART will partner with REVERB for this tour, to reduce the environmental footprint of the events while also engaging fans in local and national causes each night in the concourse. For more information, visit REVERB.org.

When Ann and Nancy Wilson formed HEART, the idea of two women leading a rock band was still groundbreaking.  From the moment 1976’s Dreamboat Annie was released, they became stars. With hits like “Magic Man,” “Crazy On You,” “Barracuda,” “Alone,” “What About Love,” and “These Dreams,” the band became one of the biggest hit-makers in the seventies and eighties selling more than 35 million records. In 2012, their memoir Kicking & Dreaming: A Story of Heart, Soul and Rock & Roll became a New York Times bestseller, and in 2013 the group was inducted into the Rock and Roll Hall of Fame.

About JOAN JETT & THE BLACKHEARTS:

Joan Jett is an originator, an innovator, and a visionary. As the leader of the hard- rocking Blackhearts, with whom she has become a Rock and Roll Hall of Fame inductee, she's had eight platinum and gold albums and nine Top 40 singles, including the classics "Bad Reputation," "I Love Rock 'N' Roll," "I Hate Myself For Loving You," and "Crimson and Clover." Her independent record label, Blackheart Records, was founded in 1980 after she was rejected by no less than 23 labels. Blackheart is one of the longest running indie labels and continues to give voice to new bands. Jett has acted in movies and television, including 1987's Light Of Day, and in a Tony-nominated Broadway musical, The Rocky Horror Show. She has appeared on such acclaimed television shows as Oprah (the last season) and Law and Order.

As a producer, she has overseen albums by Bikini Kill, Circus Lupus, as well as the Germs' LA punk masterpiece, GI.

Her music has become a permanent force in mainstream culture. A version of "I Hate Myself for Loving You” was reworked for NBC's Sunday Night Football theme song, “Waiting All Day for Sunday Night”, and was performed for 9 seasons by the likes of Pink, Faith Hill and Carrie Underwood. Her music is heard in countless films and TV shows including Easy - A, Kick Ass, The Runaways, Shrek, Baby Mama, and many more.

Since co-founding the Runaways, the pioneering all-girl punk quintet, at age 15, Jett's determination and drive have kept her in the public eye. Jett was able to see her story told in The Runaways, the film based on (lead singer of The Runaways) Cherie Currie's book Neon Angel starring Kristen Stewart as Jett, and her fellow A-lister Dakota Fanning as Currie. Jett was close to the project: She served as an executive producer. Jett and the Blackhearts released their latest record, 'Unvarnished,' in 2013 and continue touring the globe to throngs of adoring fans.

Joan Jett has spent her lifetime breaking barriers and challenging expectations - this is, after all, a woman who is both a spokesperson for PETA and a devoted supporter of the US Military. She's fought hard for all of her historic accomplishments, yet she remains humble and appreciative.

"I've had a blessed career," she says. "I consider myself so lucky to have been able to do things my own way."

Fall is heating up with concerts and the CAJUNDOME is encouraging you to get here early, stroll through the Coca-Cola Concert Corner! Join us outside the CAJUNDOME starting at 5:30pm Saturday, October 5th, for entertainment from 99.9 KTDY, ticket upgrade giveaways, concessions and more!  Brought to you by the CAJUNDOME, Coca-Cola, & Townsquare Media's 99.9 KTDY.

The Coca Cola Concert Corner will take place prior to the following fall concert events:

Tickets to all upcoming concerts are available at the CAJUNDOME Box Office & online at Ticketmaster.com.

FOR SAFETY REASONS, PATRONS MAY BE REFUSED ENTRY IF THEY ARE IN POSSESSION OF PROHIBITED ITEMS INCLUDING, BUT NOT LIMITED TO: ALCOHOLIC BEVERAGES, ILLEGAL DRUGS, KNIVES, WEAPONS OF ANY TYPE, ANY FOOD ITEMS OR DRINKS, GLASS/PLASTIC/METAL CONTAINERS, VIDEO OR AUDIO RECORDERS, LASER POINTERS, BACKPACKS, COOLERS, STROLLERS OR CARRIERS, CONFETTI, HELIUM BALLOONS, BASKETBALLS, BEACH BALLS, PARCELS OR PACKAGES AND LARGE BAGS OF ANY KIND.